In my former life, before becoming a full-time genealogist I was an Account Executive with an insurance company. I kept spreadsheets on all my clients that included their children’s names, birthdays, what they always ordered when I took them out to eat, etc. Everything was saved on my work computer and I thought nothing of it – until I almost lost it all. 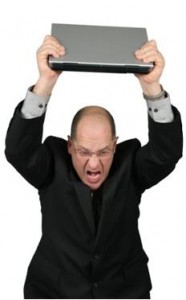 I was working at home one day when my computer started to smoke, and then a small flash of fire burst out [this is a true story]. I yanked the computer out of the wall, threw it on my front lawn and called the fire department. They checked all the wiring in the room I was working in and everything was fine, but I was still panicked. Was my hard drive affected? Had it melted? Did I just lose everything I had been working on for ten years?

The next day when I brought the computer to the IT department, they didn’t believe me until they opened up the computer. It turns out that two wires had come loose and touched each other which had caused the smoke and the flash of fire. I could have cared less. All I wanted to know was whether my hard drive been affected. Thankfully it wasn’t. They were able to put my hard drive into another shell and I was on my merry way. However, this was when I realized I couldn’t put all my eggs in one basket, or one computer, in this case. That’s when I started talking to computer people about backing up my data.

Back in those days they had come out with these big and bulky external hard drives which were expensive at the time. I bought one anyway as a business expense, and every month on the first of the month, I would lug the drive out of my closet and backup my data.

Now that I have switched professions and am aware of the tragedies many have faced when their computers have crashed or died, I am extremely careful with my data. My laptop is just for genealogy and if I were to lose it I would lose years of research and data.

Now that backups are inexpensive, there is no excuse to have all your data in one place. You can back up your data to discs, flash drives, portable hard drives, the cloud, etc.

If your eyes just glazed over because what I mentioned sounds complicated, it’s really not. And if you don’t want to do the work yourself there are always services like Carbonite (www.carbonite.com)  that backup up your computer continuously for a yearly fee.

What do I use? Since I’ve had a computer catch on fire and another one die on me, I am extra careful. I have an iMac that I don’t use since I got my laptop, so I used Apple’s ‘Time Machine’ to back it up onto a portable external hard drive, which I keep in a safety deposit box.

As for my genealogy laptop I have multiple backups. I have about six flash drives; one for each of my family lines, one for client data, and one for miscellaneous projects. I also have an external hard drive to hook up to my laptop at the end of the day to backup anything I have worked on that day. Once done, I put it in my purse to carry with me when away from my laptop, or leave it at home when I have my laptop with me. Lastly, I have a Carbonite account as the end-all safety net.

I’m not saying that you need to take after me and have the “what if everything fails” mentality. But if you have all your data on one computer, what would you do if something catastrophic happens? I encourage you to look into using one of the above suggestions to have a second copy of your hard drive. That way, if your computer does die, when you get a new one, you can use your back up to reload the information onto your new computer and your data will not be lost forever.