My grandfather was a man of few words. His favorite pastime during his retirement was sitting in his kitchen in Massachusetts, and watching his favorite team, the Boston Red Sox, play. When they won the World Series in 2004, I almost fell over. I immediately called my grandparent’s house to see if my grandfather was okay. He was after all 89 year of age and in poor health and I wanted to make sure he didn’t have a heart attack and collapse. Luckily that wasn’t the case. He was chatty and I could hear pure pride and happiness in his voice. Something I had never heard before in my lifetime but would one more time.

My grandmother had to have when my grandfather was 91 and since she was going to be in the hospital for five days and since my grandfather couldn’t drive anymore, I flew up to Massachusetts to stay with him for the week and to bring him to visit my grandmother daily. Since he had already brought up the subject when he asked me to look into his family history for him, I made what I thought was a great list of interview questions for him. When we sat down to breakfast one morning I started asking him a few questions about his favorite music, movies, and so one. I pretty much got one to two word answers to my open ended questions. I thought I was wasting my time, until I asked the question he must have been waiting to be asked, “What was it like being in the Navy during WWII?” His face lit up like I had never seen and a big smile came across his face. He told me that serving his country during WWII was “The best time of my life”. He then launched into a two hour one sided conversation with me. He told me that he was working in the Navy ship yard repairing ships when the war broke out. He said he followed the war through the papers but never thought about enlisting until the Japanese attacked Pearl Harbor. After that he felt the need to enlist and since he was working for the Navy it only made sense to him to join the Navy.[1] He told me so many stories that day that it felt I was really meeting the younger version of my grandfather for the first time. My hand was taking notes so fast it would ache for days after, but I was having a fantastic time.

Unfortunately, my grandfather passed away the following May, just before his 92nd birthday. He and my grandmother had made it through 67 years of marriage. He was buried with his fellow soldiers at the Massachusetts National Cemetery in Bourne, Massachusetts. After his funeral, I found myself a little lost about what to do next with my life. Should I drop the subject of genealogy or should I still pursue it even though I had lost the person who had inspired me to pick it up. Then one day, during my day job, I was on the internet clicking on random items about WWII. I saw that copies of military records were available to veterans or next-of-kin of deceased veterans.[2] I clicked on the link and it brought me to an online ordering system. I immediately called my father and had him request my grandfather’s military record. Even though he was only in the Navy for just under two years and the charge to the next-of-kin was $60, I thought  the file would just give me back a piece of my grandfather’s life.  I didn’t expect the treasure I received.

Two weeks later I got it in the mail unopened by my father and was amazed with what I had. It was a plain manila file folder that had to be at least 2 inches thick. What could be in there? He wasn’t in the service that long. I opened the folder and there he was, my grandfather’s mug shot I call it. It was the first picture that was taken of him when he enlisted showing his height and noting his weight. Next I found my grandfather’s fingerprint card, and after that a picture of his class when he graduated from boot camp in New York. New York? He never mentioned New York. Every page was a different treasure, a piece of information I never knew.  During his story to me why would he have thought to mention his starting rank, his promotions, where he went to boot camp, what his specialty was in the Navy and so much more. He told me the stories of the who, what, when, and where. Now I was seeing the official story straight from the Navy to his file.  It completed the picture for me and I was beyond thrilled.

A friend of mine’s father passed away just over a year ago. While at our house for dinner she was telling a story about him and at the end mentioned he never would talk about his time in the military. I perked up and asked her how long he was in the service for and she told me he had been in for 20 years and was honorably discharged when she was a child. I couldn’t speak quickly enough. I told her about my grandfather’s military record and even brought it to the table for her to look through. My grandfather was only in for a short time and she was amazed at the information. I went to my file drawer and got the forms that she needed if she decided she wanted to order her father’s military record. She is still debating whether or not to get it. She thinks maybe there was a reason he never talked about it and she’s a little scared of what might be in it.[3] Either way she decides it doesn’t really matter. It’s about knowing she has an option which she never knew existed. 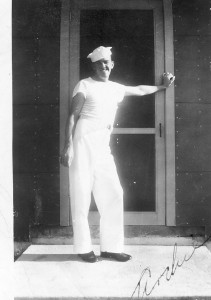