What are naturalization records and why you need them?

I have told many people that before you “jump the pond” to your ancestor’s homeland, it is important to gather all the documents and information you can on their life in the United States first. Many people will notice on census records that their ancestors were either AL-Aliens or NA – Naturalized Citizens and there will be a date of Naturalization next to the NA. What most people don’t realized is there is usually at least a two page file with a wealth of information associated with the male immigrants. Wives and children were usually naturalized under their spouse/father. The file usually includes at least two very important documents:

Sometimes, the 5 year waiting period was waived.  My great-grandfather, Coleman Joyce, came to the U.S. from Ireland in 1915 and was recruited into the U.S. Army, stationed at Ft. Devens in Massachusetts, and was taught a trade. When he was discharged after nine months, he filed a Petition for Naturalization and was approved for citizenship. The great thing was that his documents mentioned what ship he came on and where he left from in Ireland [Lettermore Island, Galway, Ireland], which made it easier to find him on a passenger list. The passenger list then confirmed where he was born and his father’s name. When my parents took their “Trip of a Lifetime” to Ireland in 2011 they were able to take a detour to where Coleman Joyce, my father’s grand-father grew up. He could not imagine that his father was one of 13 known children that lived in a two room house on such a small island. It made the trip more personal to him and it can for you as well.

Other times, citizenship was denied. My great-grandfather’s brother, Michael Joyce came to this country in 1914 and filed a Declaration of Intention. He filled out a WWI like everyone did in about 1917, but he was drafted.  To keep from serving in the war he used his legal right to declare alien ship and not have to serve. He filed his Petition for Naturalization in 1920. He must not have realized that the government would check with the military to see if he was a veteran or not. Since it was found that he claimed alien ship during the war [his legal right], the government exercised their right to deny him citizenship and make him wait another five years to file again. By the time he refilled in 1925, things had changed to my delight. This time he was granted his citizenship, however when I got his file I was shocked that I was staring at a picture of my great-grandfather’s brother.

K.G. Genealogy and Research specializes in obtaining Naturalization records post 1906 from NARA for New England, New York, and Pennsylvania. We are also helpful in locating records from local courts prior to 1906; however those records usually cost more than those held by NARA. 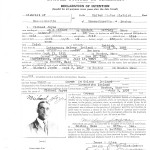 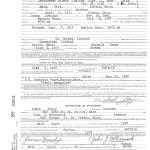